When it comes to litigation of failed curtain wall systems, we help construction attorneys understand the nature of the defect. Just as important is helping them to understand, through extensive forensic testing methods, how that defect occurred, and what it will take to repair it so that both parties can reach a settlement.

Chris Matthews, Vice President, and Principal at GCI Consultants have consulted on and provided testimony for multiple cases involving curtain wall system failures. He has seen how the different types of defects can cause expensive and complicated repairs –in extreme cases, building owners are looking for a total replacement.

He notes that there are usual suspects when it comes to curtain wall failures:

“We’ve been involved most often in water infiltration cases, but we see many other issues at times along with structural issues as well,” says Matthews.

A curtain wall can span multiple floors and even the entire height of the building and is a complex system that has many interrelated parts. The curtain wall system is often mounted outside of the building’s underlying structure and must withstand stress from various load types.

Matthews advises, “A curtain wall system is not simply sticking a window in a hole. It’s attached to the building in a way that must support the dead load of the system itself but is also resilient to all of the other loads such as thermal, seismic, and wind effects.”

It’s important to work with an expert witness who has extensive knowledge of the complexities of these systems and their inherent problems to build a strong case.

Glazed curtain wall systems are actually a very durable system that doesn’t see typical wear and tear issues like you would for a basic window that you might open and close hundreds of times during its lifetime.

According to Matthews, “Your curtain wall will typically hold up 20 -30 years. So if you see a problem after just two years – there’s possibly an installation error and subsequently, a party at fault.”

If there’s a problem with a newer building envelope, it’s most often water leakage.

“We’ve seen it happen time and again where right after someone took ownership of the new building, they had leaks. They then proceed to call the builder or glazing contractor for resolution.”

According to Matthews, that can start a cycle of frustration for the building owner.

“Sometimes the contractor will come out multiple times to mitigate the problem and the next time it rains, it leaks.”

At some point, when the problems are not resolved, a lawsuit is filed and the wheels begin turning on an investigation into what went wrong.

If you have a curtain wall that got all the way to the point of a lawsuit – there are probably leaks all over and serious problems that can’t be denied.

“That’s when we get into the full-scale investigation with partial disassembly of portions of the system to get down to the root cause. At first, we’re just trying to determine the nature of the defect and what it’s going to take to fix it,” says Matthews.

When it gets to the proceedings in court or mediation, the parties will likely argue about what is wrong and also about the best way to fix it. One party may propose reapplying sealant on localized spots while the other party may want to replace the entire curtain wall.

“We’ve assessed these systems for over 30 years and can confidently identify the root cause and can accurately determine what it will take to resolve the issues.”

Matthews says that most often, the problems are installation-related, which makes for a reasonable claim for a lawsuit.

“We also perform forensic investigations on age-related issues that don’t turn into lawsuits at all. With age-related failures, you’re probably just looking at normal aging of a building, which is nobody’s fault.”

Glazed Curtain Wall Systems 101: It Often Comes Down To Sealant

While there are a thousand things that can go wrong, when it comes to curtain wall system water leakage and litigation – you’re usually talking about a problem with sealant.

Here are 5 key points to consider when faced with a construction litigation case that involves a curtain wall system failure.

Because many types of installation defects are internal to the curtain wall system, they’re hard to access and expensive to fix. This means that more than just dollars should be considered in resolving the dispute.  The owner must be assured that their building is fixed and will perform over the long haul.

Matthews recommends working with an expert who can provide consultation on the best way to resolve the problem for your clients, not just point out a list of problems.

“There’s a technical process for correcting the problems. We usually recommend a mock-up repair and confirmation testing to verify the repair method is effective.  You don’t want to end up with a big-money settlement and the problem still isn’t fixed.” 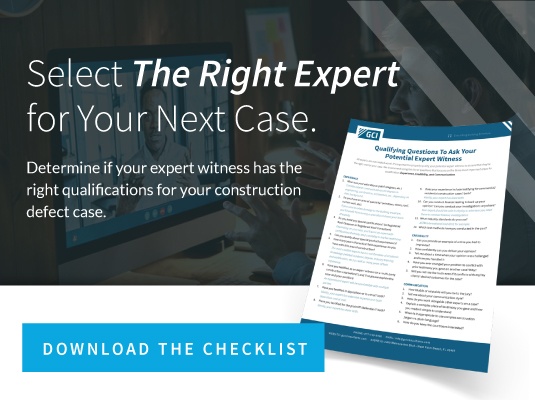